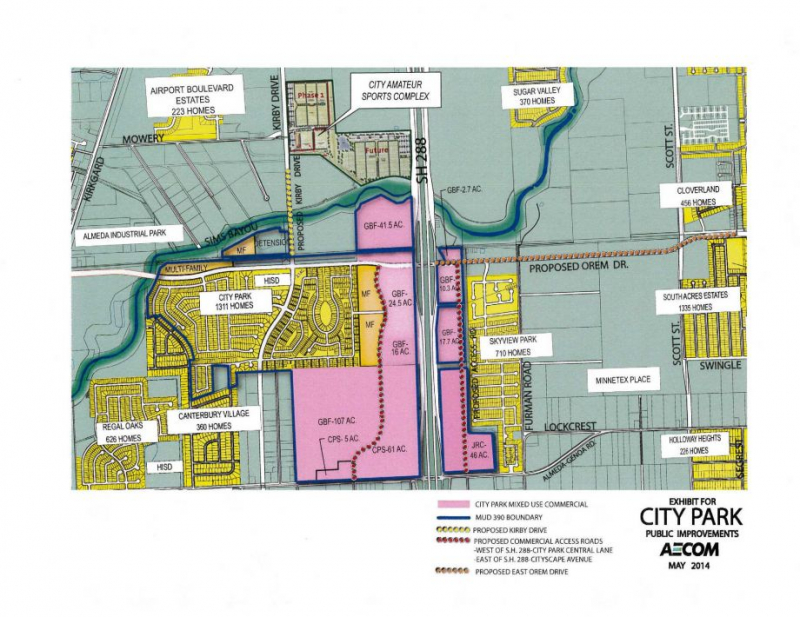 An economic development tool known as a 380 agreement is being used to fund some $18 million worth of infrastructure and roadway improvements along a stretch of Texas 288 designed to attract grocery stores, restaurants ad other shops to a part of Houston that has virtually no commercial development.

Retailers have avoided the area between Orem Drive and Almeda-Genoa because Texas 288 doesn’t have any acess roads running parallel to its main lanes, said land developer Sam Yager III of Sam Yager Inc., which is developing the City Park residential project in the area.

He said the city is losing potential tax revenue to Pearland because of the infrastructure limitations that have left the area between Loop 610 South and Beltway 8 with no commercial development.

“This is a food desert,” he said. “There are all these residents who live out here in an area not as high end as some of the other areas of town. There needs to be some action taken in order to incentivize businesses to come down to serve all these residents.”

Yager said 10,000 houses have been built in the area over the last decade. Some of them are in City Park, a 624-acre housing community. More than 1,815 homes are planned for the development, of which 1,311 have been built and are occupied. There are also hundreds of apartments and land planned for additional multifamily, retail, office, and other uses.

Two 380 agreements were finalized in late 2013 between the city of Houston and Municipal Utility District 390, which was set up to serve the City Park area. The first bonds are about to be sold to finance the initial infrastructure work. The MUD will finance the project and later be reimbursed by additional taxes generated in the area. “This is the kickoff of all the development,” Yager said.

Construction will likely start early next year, and it could take several years before all the improvements are made.

The roadway expansions are going outside the MUD’s boundaries to connect through other properties. “This is part of a regional mobility plan that serves people outside of our project,” Yager said. “There were a lot of wins here.”

Old Sakowitz Building
Downtown officials have narrowed the list of developers they are looking at to redo downtown’s former Sakowitz building and an adjacent property, the latest step ina plan to add more retail options to the city center.

The Downtown Redevelopment Authority hopes to facilitates an agreement between the owner of 1111 Main – the former Sakowitz department store – and 1010 Lamar and a developer that would result in a mixed-use project with some 90,000 square feet of retail space along with residential units or a hotel.

The idea came out of a retail task force formed by Mayor Annise Parker in 2013 to research opportunities that could lead to more shopping options downtown.

A half-dozen groups submitted proposals early this summer. Three groups made the short list and have been asked to provide additional information.

“If all goes well,” he said, “we are hoping we can get that paperwork wrapped up before the end of the year and have the project started as soon as possible thereafter.”